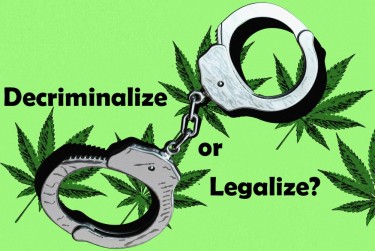 We’ve been seeing the words “decriminalization” and “legalization” being tossed around news headlines countless times over the last few years.

On the surface, it can seem like both are good news when it comes to cannabis. They both are signs of progress, but there are huge differences between the two. If we truly care about cannabis being widely available to everyone who needs it, we should understand the difference between these terms so that we know what it is we have to do to get cannabis where it is rightfully, as soon as possible.

Cannabis decriminalization occurs when criminal penalties enforced on personal consumption are relaxed. Police officers tend to ignore minor cases when people are caught for possession of tiny amounts of cannabis that were only intended for personal consumption. When cannabis is decriminalized, it also means that sale and production of cannabis are still unregulated but if you do get caught by law enforcement, you are subject to civil penalties instead of harsh criminal charges.

Decriminalization is certainly not enough if you want cannabis to progress. It should merely be seen as a step forward towards achieving total regulation and legalization. Leaving cannabis decriminalized in states is better than a total ban, as it reduces severe criminal charges and the number of people that are incarcerated and arrested, but it actually encourages criminal monopoly in the cannabis trade. If cannabis is unregulated, drug cartels and gangs still thrive in society. It means that there is a greater risk that underage kids will be able to access drugs on the street, which also tend to increase crime as previous studies have shown.

“Decriminalization is only half the answer. As long as supplying drugs remains illegal, the business will remain a criminal monopoly. Jamaica’s gangsters will continue to enjoy total control over the ganja market. They will go on corrupting police, murdering their rivals and pushing their products to children. People who buy cocaine in Portugal face no criminal consequences, but their euros still end up paying the wages of the thugs who saw off heads in Latin America. For the producer countries, going easy on drug-users while insisting that the product remain illegal is the worst of all worlds,” said The Economist back in 2014.

When it comes to legalization, laws that prohibit personal use or possession of cannabis are completely eradicated. It also means that the government can regulate the cannabis industry as well as tax its sale and use. Legalization is always the preferred outcome, and there are many benefits to it.

For one, legalization results in massive job creation. From high-level executive jobs to cultivators, budtenders, consultants and everything in between, legalization has some fantastic economic and income benefits. Not only does the legal cannabis industry create more jobs, but they also pay higher than the average job in the United States.

Cannabis farmers tend to be taken for granted; without them we wouldn’t have the weed we’re smoking. When cannabis is legalized, farmers get paid better. Case in point: when hemp was federally legalized, farmers had much more new opportunities to earn better by growing a proven lucrative crop. The National Hemp Association says that some 90,000 acres in the United States are filled with hemp plantations, and it’s also easy to grow so farmers can worry less about any harvest risks involved. It also ensures that banking services are more widely available, including crop insurance.

Legalization also brings about huge tax revenues, and that benefits everyone. States can use the money to build schools, infrastructure, fund addiction centers and even research projects. Cannabis taxes in Washington and Colorado in particular are pretty impressive.

There’s also the investment benefit of legalization; where cannabis is legalized, it boots the investment portfolios for investors throughout the country as well as abroad. As long as cannabis is illegal on the federal level, it inhibits the potential of investors to capitalize on the industry’s growth. Sure, there are already cannabis companies on various public stock exchanges and investors can work with them over the counter but most of the successful transactions have been limited to other countries where cannabis is completely legal, such as Canada. If cannabis is completely legalized – nationally speaking, then cannabis companies would have the freedom to list their stocks on the stock exchanges in the country, boosting their liquidity and opening up the doors to more investors.

And while many people criticize that cannabis leads to higher crime rates, the opposite is actually true. Many studies already prove that legalized pot has already decreased in states where medical cannabis is legal. Case in point: a 2017 study points out that states that are located near the Mexican border with legal MMJ saw a significant drop in violent crime.

Even cops have been able to see benefits themselves: when weed is legal, studies show that crime solving rates of law enforcement officials are much quicker too. That’s because they have more time on their hands to deal with actual violent crime without having to deal with minor cannabis offenders.

Despite the obvious benefits of legalization, which have been proven in several states already, many groups are still opposing it. Some of them say that law enforcement will have difficulty with the changing regulations, a concern about crime increase, reduction of property values and other irrational concerns. Then there are also those who oppose the legalization of cannabis just because it would change the status quo.

While these are disheartening to read, we have to remember that we can’t give up on the fight until it’s actually legalized at the federal level. We are counting on more states taking the necessary steps forward toward legalization even if it means they decriminalize first, legalize later. The economic and social benefits are too many and significant to ignore. 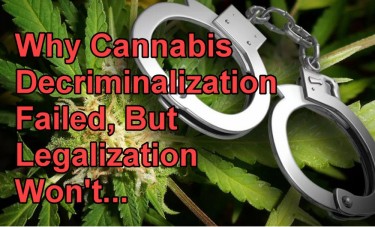 WHY DECRIMINALIZATION FAILED AND LEGALIZATION WILL NOT! 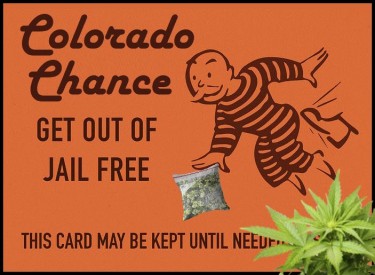