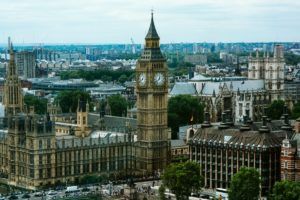 The United Kingdom will decline to approve a 6-month-old bill to open commercial opportunities involving medical cannabis in the British Virgin Islands (BVI) until a deal is reached between the two nations over the transfer of narcotics licensing authority, the U.K.-appointed governor of the overseas territory disclosed.

Arrangements are being made to initiate the discussions now, Marijuana Business Daily has learned.

Augustus Jaspert, the U.K.-appointed governor, broke his silence as tension mounted in BVI over the unexplained delay in his approval of the pending law.

In June, the country’s elected representatives passed the Cannabis Licensing Act to open up the sector for commercial opportunities – leaving the U.K., and the governor, as the final hurdle.

Now Jaspert says the BVI and the Home Office – the U.K.’s equivalent to the U.S. Department of State – still must negotiate a memorandum of understanding to transfer licensing authority for narcotics to the BVI, according to the statement. That responsibility currently resides with the Home Office.

A governor’s office spokesperson told MJBizDaily that BVI government officials had not consulted with the Home Office during the development of the bill.

“The Home Office stand(s) ready to discuss and arrangements are being made to start these discussions now,” the spokesperson said.

“These two bills are a reminder of the importance of BVI-U.K. collaboration on matters that relate to international obligations during a bill’s development,” the spokesperson said, emphasizing “during.”

The other bill – the Drugs (Prevention of Misuse) Amendment Act 2020 – would decriminalize possession of small amounts of cannabis and erase some previous convictions.

After the bill was approved by BVI representatives in June and given to Jaspert for consideration, an extensive review was initiated between the U.K.’s Foreign, Commonwealth and Development Office (FCDO) and the Home Office, according to information provided by the spokesperson.

“Both bills have required line-by-line cross-examination to ensure compliance with international obligations, plus consultation with the U.K. Home Office to identify preliminary steps required to transfer a licensing authority, plus cannabis has been a live debate in the United Nations and World Health Organization during this period,” Jaspert’s spokesperson said.

As for why the consultations, which appear to be the cause of the delay, were not disclosed to the public months ago, the spokesperson said: “It would not be right to provide a running public commentary on the process. The governor has kept the premier updated throughout.”

The FCDO is the U.K. government department that holds responsibility for the relationship with overseas territories, while the Home Office is the department responsible for policy and international obligations relating to narcotics.

“We have now received advice from the U.K. government’s Home Office,” Jaspert said in his public statement after those discussions.

“BVI and the Home Office need to work together to take preliminary steps to transfer (narcotics licensing) authority and enter into a memorandum of understanding, which is a binding agreement between the two Governments. That way, there can be certainty for all involved that BVI’s new industry will not breach the 1961 Convention or any international law now or in the future.”

The governor has asked officials in the BVI and U.K. governments to complete this work together.

“As these practical steps will be between the BVI government and the U.K. government … I have passed this to the Foreign Secretary,” he said.

The negotiations will not include the governor’s office.

“Once these steps have taken place, I hope assent can be granted,” Jaspert said.

The governor’s statement this week also revealed apparent concerns over the bills’ compliance with international regulations – in particular the 1961 Single Convention on Narcotic Drugs.

MJBizDaily previously suggested that issue might have been the cause of the delay.

However, dozens of countries have implemented similar laws and regulations to the one BVI is proposing over the cultivation, processing, importation, exportation and sale of medical cannabis.

“International regulations on this matter are extremely complex and the bills have required a great deal of scrutiny and cross-examination with international laws,” according to Jaspert’s statement.

“As BVI is an Overseas Territory of the U.K., BVI is bound by the U.K.’s international obligations – such as those set by the United Nations – when it comes to the regulation of drugs.

“The U.K. has ultimate responsibility for ensuring BVI complies with those obligations and the U.K. is held liable if there is a breach in compliance.

“Therefore, in addition to the scrutiny given to the bills in our House of Assembly, they have also required extensive line-by-line scrutiny in the U.K.”

Jaspert said his review of the two BVI cannabis bills was “further complicated” by the United Nations Commission on Narcotic Drugs’ study of a World Health Organization recommendation to remove cannabis and cannabis resin from Schedule IV of the 1961 Convention.

“This bill presents potential economic opportunities for the Territory and I applaud the efforts to diversify our economy,” the governor said. “I am supportive of BVI investing in new and innovative industries and creating jobs and growth for the people.”

Matt Lamers is Marijuana Business Daily’s international editor, based near Toronto. He can be reached at [email protected].