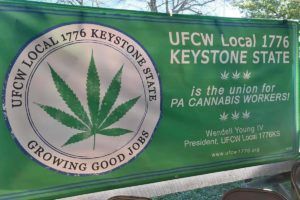 The United Food and Commercial Workers union has signed contracts with marijuana companies in several states, including Pennsylvania.

Marijuana businesses have the same legal obligations to their employees that mainstream companies do, according to attorneys specializing in labor and employment law. That means cannabis employers must implement labor-relations strategies that will help shield their companies from employee-related lawsuits.

“Cannabis companies face the same panoply of employee issues, legal issues and the like that any other business operating in America faces,” said Jonathan Keselenko, a partner specializing in labor and employee relations at Boston-based law firm
Foley Hoag.

“Unions view cannabis as a huge opportunity,” Keselenko said. “They have been making sort of a full-court press to get the industry organized.”

The United Food and Commercial Workers (UFCW) has been the most aggressive union seeking to organize cannabis workers in the United States, attorneys said. The union—which says it represents roughly 1.3 million workers in a range of sectors—has signed contracts with marijuana companies in California, Illinois, Massachusetts and Pennsylvania, among other states.

So, what does the union push mean for marijuana businesses?

Unions are not inherently bad for a business, Keselenko said. But if businesses don’t have policies in place relating to employees and unions, they could find themselves forced into difficult situations in the future. Such scenarios could include being compelled to enter contracts that might limit a company’s ability to adjust compensation or make changes in scheduling and workplace policies.

“It does operationally tie the company’s hands somewhat,” Keselenko said. “I strongly believe that when a cannabis company is opening that they at least need to take account of the issue.”

That was made clear in January, when the UFCW struck a settlement with three California marijuana companies—Have a Heart, Harvest Health & Recreation and High Times Holding—to collectively pay $75,000 to cover backpay the workers were due through their union contracts.

The UFCW originally struck the settlement with Have a Heart in January 2020, but the Seattle-based company soon sold the two shops to Harvest, which then sold the stores to cannabis publisher High Times, which recently moved into retail. Harvest and High Times initially rejected the union contract, but the union continued to press both companies, and eventually they agreed to the $75,000 settlement.

Other union-related issues also deserve attention. For example, a small number of states—including California, New Jersey and New York—require cannabis businesses to accept so-called “labor peace agreements,” which dictate that a company will stay neutral if a union tries to organize the workers. In other words, the companies cannot try to dissuade workers from joining a union.

If companies are in a state where they are required to sign a labor peace agreement, Keselenko advises them to ensure the agreement is only for the state they are in and not a general pact that could follow the business to other states.

Also, once unions establish themselves at a company, businesses need to be prepared to negotiate collective-bargaining agreements. As the Have a Heart case illustrates, the contract can be transferred from one company owner to the next.

Besides unions, cannabis company owners face the regular slew of employee-related legal issues. Among the most prominent: How a company classifies its employees. That will determine how much they are paid, the benefits they get, the rights they have and other areas covered in contracts.

The classifications essentially boil down to:

If an employer misclassifies staffers in a way that they made less money or benefits than they should have, that could spell legal trouble for the company.

“If (employees) are misclassified, they could sue you for unpaid wages” said Michael Freimann, an attorney specializing in labor law at Greenspoon Marder in Denver.

Moreover, cannabis companies must comply with a variety of other laws such as the Americans with Disabilities Act as well as those addressing racial discrimination and sexual harassment.

“When states have their own laws, that can make it difficult for companies,” said Rachel Gillette, chair of the cannabis law practice at Greenspoon Marder. As an example, she pointed to Colorado, where lawmakers passed the Equal Pay for Equal Work Act in 2019.

The law took effect this year. Among other things, it requires a company to tell its employees about any employment advancement opportunities and job openings, as well as the pay range for those positions.

“People tend to be so focused on the daily grind of keeping the operations going that they may miss some really important regulatory changes,” Furman said.

The COVID-19 pandemic has complicated employer-employee relations. For example, the Families First COVID Response Act of 2020 mandated that companies give employees time off if they fear working while the coronavirus remains a public-health issue. But the legislation expired Dec. 31, leaving its future uncertain.

As a result, attorneys said it’s unclear how much flexibility or time off a business must provide. Attorneys also noted their firms have seen upticks in coronavirus-related employee litigation.

When it comes to vaccinations, for example, several attorneys agreed that strongly encouraging employees to get vaccinated is a good way to proceed, although mandating workers to get the injection is also a legal option.

Doug Diaz, a labor and employment attorney with Haddonfield, New Jersey- based Archer & Greiner, recommends making vaccinations voluntary while strongly encouraging employees to get the shot.

The Equal Employment Opportunity Commission has noted it’s legal for employers to mandate workers get vaccinated, but there are limitations, including health-related concerns such as allergies or severe anxiety.

The rationale: An employer can prove that it’s looking out for employees’ well-being by telling them to get the vaccine, Meklinsky said. He also acknowledges there should be accommodations, although that creates another issue.

“The question becomes: What’s the reasonable accommodation? That’s where we’re going to see a lot of pushback by employees and confusion by employers,” Meklinsky said. “Those are things employers are going to have to work out.”

The importance of training

The best ways to protect your company against employee-related lawsuits is to hire legal counsel to help executives both understand the law and draft policies to guard against violations.

It’s also important to have an experienced human-resources staff who can train employees. This is especially true in the cannabis industry, where the workforce skews younger and is less experienced, Keselenko said.

“You’re dealing with business owners for whom this may be the first business that they’ve run. So it’s really important to make sure you get professional advice and, in the beginning, to set it up properly.”

Bart Schaneman contributed to this report.

NEXT: Breaking Up is Hard to Do